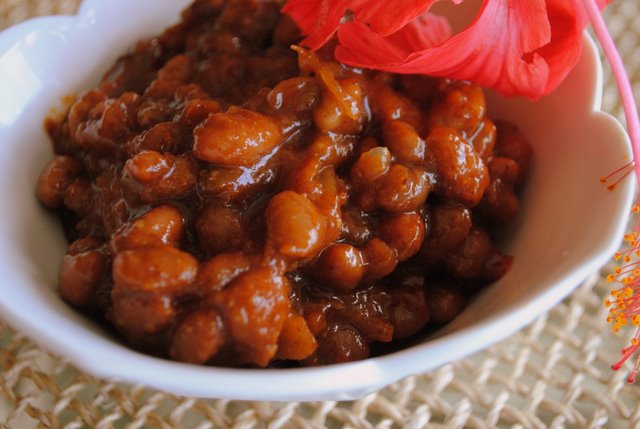 Yup, the eloquent Mr. Twain summed up Kailua-Kona perfectly.  Especially, as we can only imagine, the Kona 'of old'.

Despite the ever increasing popularity with visitors from all over the world, somehow, if you let it, Kona still exudes that 'Sundayest' feeling.  Which was exactly how I felt as I went about planning how I was going to stay in this wonderful, relaxed mode and pull off a yummy Christmas dinner for family.  Hmmmm......

Now normally, when vacationing, Christmas dinner making and baking does not come into play.  Ah, but this is a very special Christmas in paradise, a rare occasion indeed.  Everyone's stars must be aligned because somehow or other my sister and brother-in-law and many, many assorted nieces and nephews have all rendezvoused in beautiful Kona at the same glorious moment in time.  And what fun we are having!!!

So........lately, I've been concocting just how to pull off a scrumptious but ultimately easy peasy, holly jolly dinner.  There's a lot to be said for being in your happy place - that's where I am when I'm on the Big Island.  My happy, Zen place.  So the challenge of pulling off a carefree Kalikimaka dinner pretty much just fell together.

I brined a huge (well just about 9 pounds) lean pork loin in a mixture of dark beer, Kona coffee, brown sugar, Hawaiiian sea salt, molasses and sambal.  Happy soaking! Then I slow roasted the loin, basting often with a lilikoi (passionfruit) mustard glaze.  When it was done to juicy, moist perfection we sliced it quite thick and served it with drizzles of tasty pan juices and homemade papayapple sauce on the side.  Mmmm.

Beans with Hawaiian chiles, sweet Maui onions, fresh pineapple and lots of layers of flavours.  That's exactly what I was going to make.  So I winged and slinged together this and that, cheating just a little with some 'pre-made' ingredients, but happily, just as envisioned, ended up with lip-smacking, made-from-scratch-tasting baked beans.  Woohooo! 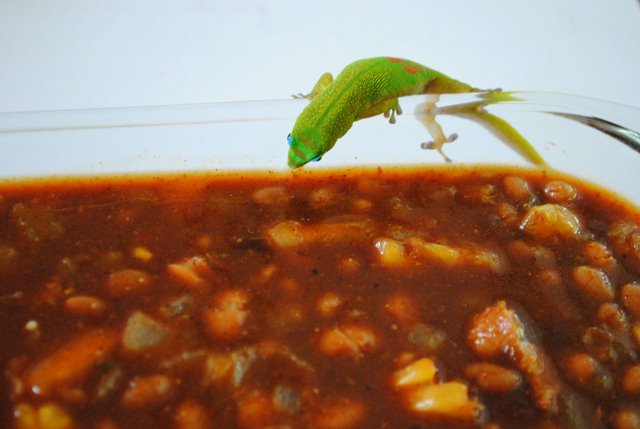 I had an inkling these beans were going to be a winner even before I baked them.  When I was tidying up after putting the bean creation into the baking dish along came a curious visitor who apparently simply could not resist a taste.  I gently shooshed him away, but he came back for more.  I was getting more confident all the time that these were going to be good beans. 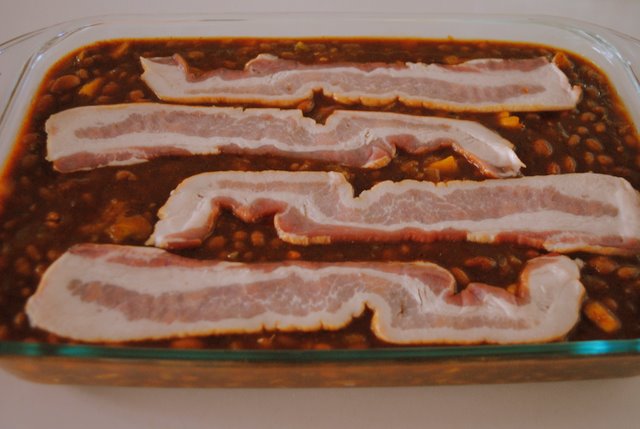 Before baking I laid some nice slices of thick-cut bacon over the beans so it could do it's work and impart those irresistible, smoky flavors and give that crispy crown that only bacon can.  That worked!

They smelled quite heavenly when they were baking and it was pretty much unanimous that they did go perfectly with the succulent pork loin, but that these Baked Beans would go well with steak, chicken, chops, burgers, sausages.......well you get the idea.  AND, they were easier than peasier, making Christmas dinner in Hawaii a Sundayest pleasure to throw together for the happy throngs! 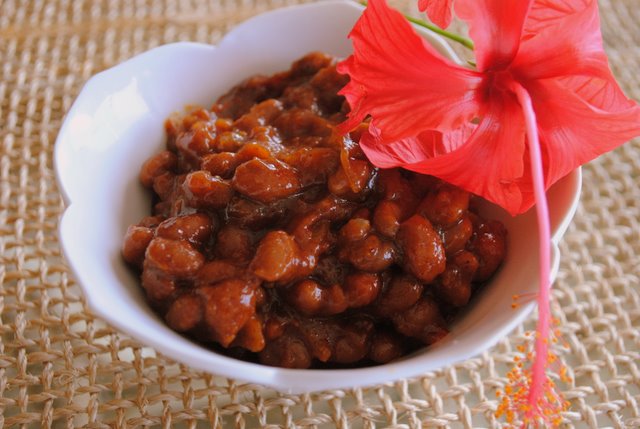 Judy! I can't get enough of this website. Ive been cooking for my friends and we love everything we have made so far. Thanks for sharing!!!