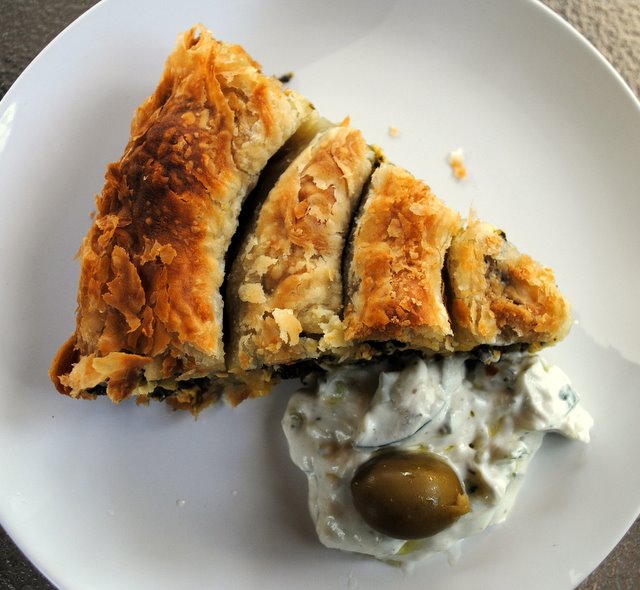 The familiar yumminess of spanakopita was the order of the day.  But, then again, I did have some beautiful, bright yellow beets waiting so patiently for me to include them in something.  Ah ha!!  Mmm....that's a good idea! "Oooo, oooo, oooo, I know, I know!" exclaimed my excited inner foodie.  Puff pasty.  Yeahhhh!  To give this delectable garden-goodie filled dish a little more happiness, puff pastry, instead of phyllo, was the only way to go.

Just a nanosecond after that delicious idea shone it's light upon me, I remembered seeing spanakopita done in one big spiral of a pie.  Ta da!  Ta da, da, da, daaaa!!!

That's it!!!  I had it.  Yay!  It's not often the ideas come rolling in like this.  I was feelin' good, feelin' fine, that this one was going to work tickety boo.  It did.

Cool looking, Greekily delicious, and I had fun concocting it too.  Served warm-from-the-oven with some homemade tzatziki and big, plump jalapeno stuffed queen olives this out of the blue dish got more than it's fair share of mmmmm's. 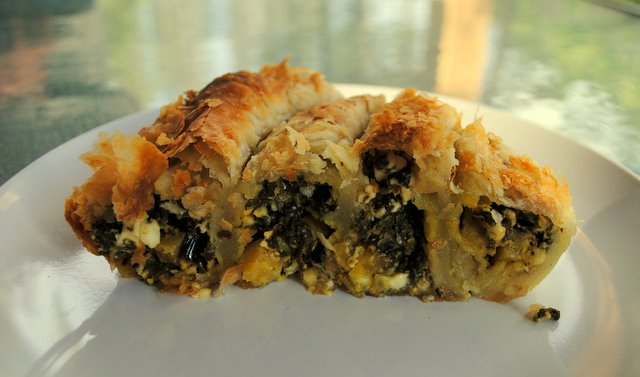 Preheat oven to 400F.  Toss diced beets with 1 tablespoon olive oil and a sprinkling of salt and pepper.  Roast on baking sheet about 20 minutes until al dente.  Transfer to large bowl.

Heat another tablespoon olive oil in same skillet, add 1/3 to 1/2 of the baby spinach and saute until spinach wilts, tossing with spatula, about 2-4 minutes.  Remove spinach to mesh strainer and with a large spoon squeeze out any excess moisture.  Repeat sauteing and squeezing with remaining spinach.

Place spinach in the bowl with the beets and green onions. When veggies have cooled to room temperature add dillweed, feta, lemon juice, just a sprinkle of salt, beaten egg and some generous twists of freshly ground black pepper.  Mix well to combine.

Cut the puff pastry in half where it is scored.  On a lightly floured surface roll each half into approximately 5 x 22-inches.  Lay 1/2 of the spinach-beet mixture all along each pastry piece.  With your fingers, dab along the top edge of the pastry with a little water to help it stick to itself.  Roll the filling up snuggly into a long snake or tube, pinching the seam together.  Brush both pastry tubes with melted butter.

In a 9 or 10 inch pie plate twist each tube into a spiral shape around itself, pinching the pastry together a bit where the first and second spirals join.  Ta da!  Looks good, doesn't it?

Bake at 400F 35-45 minutes, until toasty golden brown.  Let cool just a bit, slice into wedges and serve hot with chilled tzatziki on the side.  Yum-O!

I love it when Judi's creative juices are flowing, and I just happen to be coming for dinner. This was as delicous as it looks. Yum-O is right O.

This is my kind of food!!!!! I am told this is called strifti, but no matter..I call it delicious!