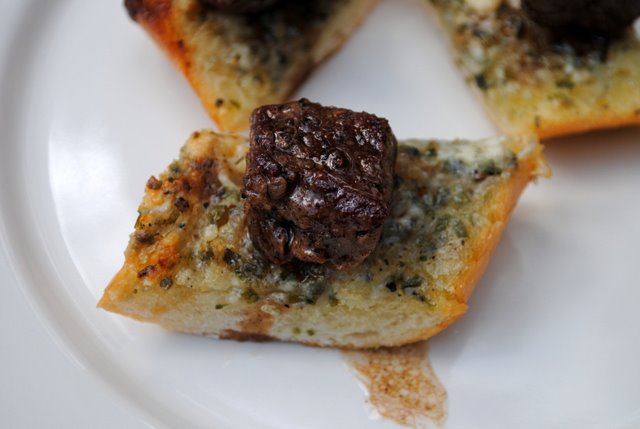 I know.  I know this isn't crostini, in the classic sense.  I did indeed put the cheese topping on before oven-toasting, rather than afterwards.  But if you had an Auntie Alice like I had, who willingly passed along her mouthwatering blue cheese bread recipe, you'd be deliciously improvisational and blur the edges between what is and what can be too.

It all just came rushing in when I was conjuring yet another way to serve up little morsels of steak for an appy.

Ummmm, maybe.....little steak sandwiches.....or, steak topped bruschetta......what about crostini with caramelized onions and goat cheese.....no, wait, maybe...... blue cheese.  Yeahhh..... blue cheese.  Then wham bam, mouthwatering memories of that blue cheese bread Auntie Alice used to make pushed their way right to the front and popped a perfect pan fried steak tidbit on top, without any assistance from me whatsoever.  So cool, when that happens. 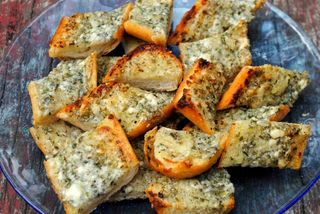 The anticipated textures and flavours were already dancing in my mouth filling me with enough confidence to toy with crostini purity and re-create a new authentic.  All things considered, rather classic within itself - steak, blue cheese and bread.

Now what about the steak?  For other appies and salads I often barbecue the steak and slice it thin, but this time I wanted those yummy crispy edges on the outside of the steak bits that only comes from pan frying.

That's about the time one more thing fell into place.  Ree, from the renowned food blog The Pioneer Woman, had taken the words right out of my mouth on how to prepare the Steak Bites. That Ree! (Thanks!) That's how this un-authentic, heirloom flavoured, sumptuous crostini came into the world.  You might just have to give this one a try to see what you think.

For the bread: Preheat the oven to 400F.  Slice ciabatta or baguette in half horizontally-lengthwise.  In medium bowl of electric mixer, combine all ingredients.  Beat until well combined.

Spread half of the butter-cheese mixture on each half of the bread.  Wrap each half of the loaf loosely in foil and bake 20 minutes.  Open foil and broil about 1-2 minutes (watch carefully!) so tops are golden toasty brown and deliciously scrumptious.  Cut into strips or smallish, random chunks and serve hot from the oven alongside steak bites.

Meanwhile, for the steak bites:  Trim off any fat that runs along the side of the meat.  Next, cut strips less that 1-inch wide. Rotate the meat and cut into small bite-sized pieces, removing any chunks of fat or gristle.  Season generously with salt and pepper.  Toss the meat around a bit to thoroughly coat with the seasonings.

Next, turn on your ventilation fan overhead.  Heat a large skillet over medium high to high heat.  As the pan heats, add about 2 tablespoons butter to the skillet.  Allow the butter to melt, then start to get golden brown, before you add the meat.

Place some of the meat in the pan in a single layer.  It should sizzle loudly when it hits the pan - if it doesn't, the pan isn't hot enough.  Don't stir or disrupt the meat for 30-45 seconds.  You want it to sizzle and brown on one side. Scoop as many steak bites as you can with your spatula and flip them over.  Repeat until all the meat is turned.  Cook for an additional 45-60 seconds - just long enough to sear the outside of the meat, leaving the inside rare to medium rare.  (Keep in mind that it will continue cooking just a tiny bit when you remove it.  So don't be afraid to take it out of the pan earlier than you think you should!)

Add a little more butter to the pan and repeat the cooking process with the next batch or batches just as before.  Lastly, when all the meat is nicely browned and removed to the plate, deglaze the skillet with the wine.  Swirl, swirl, bubble, bubble, then pour all that browned/blackened buttery wine all over the meat.

Now, plunk a steak bite or two on top of a toasty piece of blue cheese crostini and nibble me this!