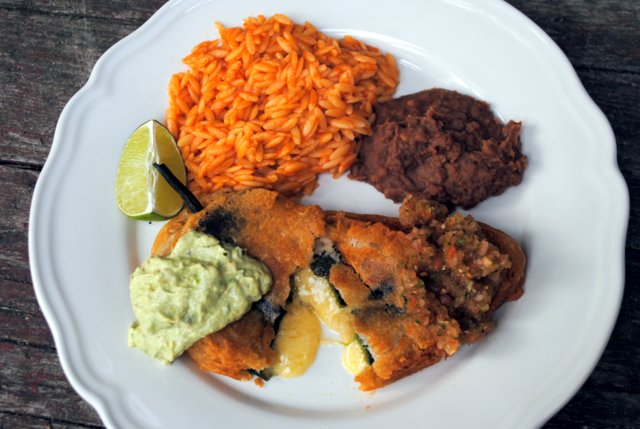 We need nary a reason to munch on any kind of Mexican food around our house, but when there is a reason, we are so there. Al frente y en el centro! (front and centre!)

The chile relleno, literally meaning 'stuffed chile', originated in the city of Puebla.  It consists of a charred, peeled, stuffed poblano pepper, which is a large, mild chili pepper named after the city of Puebla.  These days many versions abound, including using Hatch, Anaheim, pasilla or even jalapeno peppers.

And, of course, stuffings vary as well, from cheese to beef to pork to corn mixtures and seafood.

We stay pretty darn cheesy at our house when it comes to rellenos, but do mix things up a bit, switching between cheddar, Monterey jack, Havarti and sometimes a mixture including little chunkers of a mild, creamy blue cheese.  They're all delisioso! 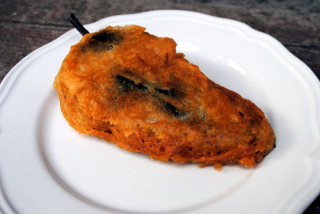 Traditional rellenos have a softer, poofier, eggy batter.  I used to do my Mom proud, separating the eggs and carefully mounding that silken batter mixture on top of the chiles, ensuring an even coating.  But somehow over the years, things have changed.

Now, I dip the cheese-stuffed poblanos into an almost-tempura-ish beer batter that transforms them into golden, crispy, sultry peppers of goodness. Each one hiding a treasure.... plush little puddles of cheesy deliciousness.

Preheat broiler.  Lay the peppers on a foil-lined baking sheet, so you can char the bedickens out of them, adding all kinds of flavour, flavour.  Place pan up on tip top rack close to the broiler and let them bask about 5-10 minutes, until the skins are dark and bubbly.   Flip peppers over and repeat on the other side.

When they're finito most of the skins should be black(ened).  You don't want to leave them under the broiler too long or they will overcook and become mushy. 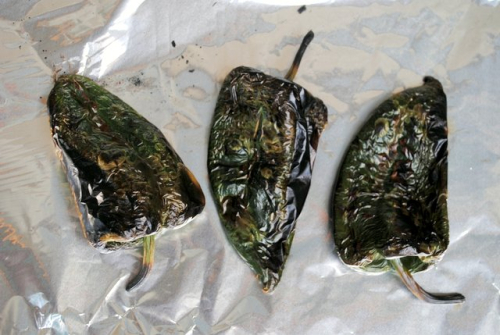 Now, while they're still very hot, placed charred peppers into a large Ziploc bag, seal and leave them be for about 20 minutes.  This will allow the peppers to steam, which will loosen the charred skin and make it easy to remove.

When they're ready, remove peppers from bag and with your fingers gently pull off the black skin.  Discard skins.  Gently, carefully, slice open each pepper, lengthwise and scrape out seeds and membrane with a knife or spoon.

Stuff each pepper with strips of cheese, or little mounds of grated cheese.  Close pepper back up as well as you can.  I almost always get creative with toothpicks at this point to keep every little thing in place.  The toothpicks are easily removed once the rellenos are fried. 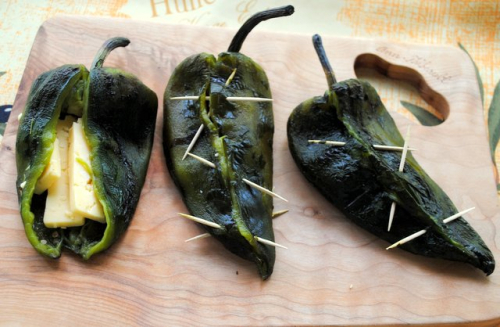 At this point you can cover and refrigerate the stuffed peppers or plunge right into battering and frying.

Put 1/3 cup flour onto plate or pie pan for dredging.

In a medium bowl mix self rising flour and salt. Whisk in cold beer to make a smooth, not-too-thick, batter.

Pour enough oil in heavy frying pan to reach about 1-inch depth and heat over medium-high heat.  Coat each pepper in flour, then dip carefully into batter and lay gently into the hot oil in pan.  Fry (not too fast!) until lightly browned on both sides.  Remove from pan, drain on paper towels, remove toothpicks, if used and Ta Da!! 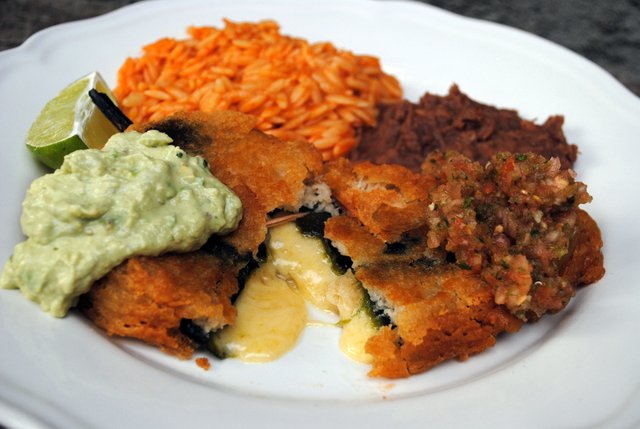 Oh Judi. This makes me drool😊