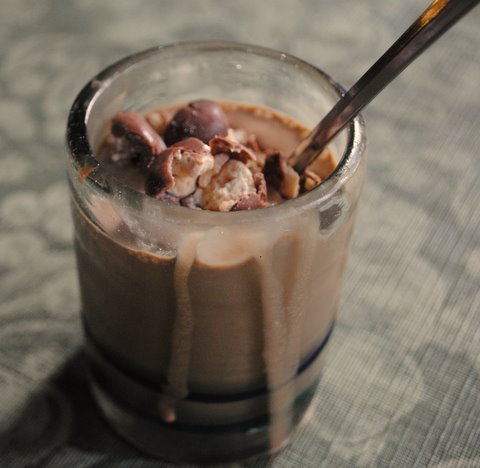 It was just what we did when we were kids in Calgary.  We went for malts.  Downtown, at Eaton's or the Bay.

I usually went to Eaton's because my Dad was the display manager there.  So in my mind I had as much clout as a kid can get in a big department store.  Smug with pride I hauled one friend or another, giggling in delight at our behind-the-scenes privilege, up those stairs to my Dad's office.

Dad was always happy to see me, with eyes that sparkled just for me and a big kiss.  And quarters from his suit jacket pocket.  That pocket, in that immaculately pressed suit, was a bottomless pit of quarters.  Really!

From Dad's office, my friend and I would race back down those stairs and make a bee-line for the escalator to the lower level of Eaton's.  That's where we hit paydirt.  Kind of tucked under the escalators was a nook of an eatery that served up chocolate malts that were so delicious they made the spoons that they stuck in them stand straight up.  Man those were good.  Chocolatey, ice creamy, but better than both.  That texture, those eensy flecks of chocolate.  Not much beat an Eaton's chocolate malt in those days.

These days, not much beats a Espresso Custard Ice Cream Malted. Seriously fun food.  Inspired by those Eaton's basement malts I've figured out a make-at-home version that's good enough to stick your spoon in.

Happy happy. I start with one of Martha Stewart's best vanilla ice cream recipes that gets it's smooth, aromatic flavour from a custard base. Then I add Ovaltine - that's my malt!  And instant espresso - deep, dark and delicious flavour popping goodness.  No chocolate in sight.  But have no fear, you won't miss it!  I promise.

Here we go.............. While you're steeping your milk, Ovaltine, vanilla bean and espresso mixture, beat the yolks and sugar together until they get beautifully thick and pale yellow. Temper the egg mixture with a little of the hot milk mixture, then whisk eggs into remaining milk mixture over low heat. 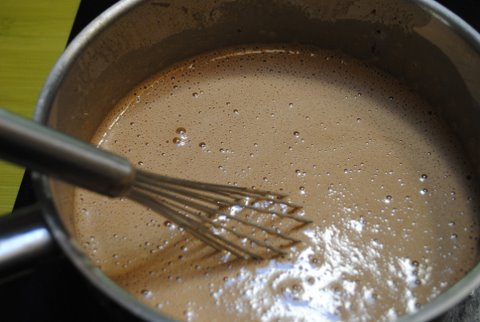 Cook over low heat until mixture is thick enough to coat a spoon.  Remove from heat, stir in cream.  Chill.  Then pull out the handy dandy ice cream maker and churn away. 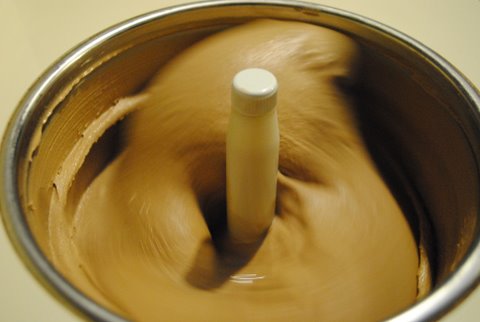 When the ice cream mixture hits just the right consistency, it's time to scoop, top with some crushed maltees and serve with a happy spoon. 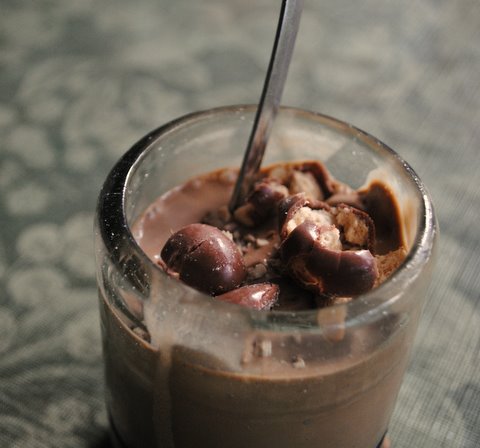 In a medium pot combine milk, vanilla bean and seed scrapings, Ovaltine and instant espresso powder.  Bring to a gentle boil, stirring.  Remove from heat, cover and set aside to steep for 30 minutes.

When mixture is just about done steeping, combine egg yolks and sugar in large bowl of electric mixer.  Beat at medium high until very thick and pale yellow, 4-5 minutes.  Meanwhile return milk to heat and bring to a simmer.  Remove vanilla bean from milk mixture.  Carefully add about half of the milk mixture to the egg yolk-sugar mixture and beat on low until blended.  Whisk the egg mixture into the remaining milk in the pot and cook, over low heat, stirring constantly until mixture thickens enough to coat the back of a spoon.

Remove from heat and stir in cream.  Set aside to cool, then chill in fridge until ready to make ice cream.

Pour chilled mixture into ice cream maker and follow manufacturer's directions.  Churn mixture only until the consistency of soft serve ice cream.  Scoop into glasses, top with crushed maltees if desired and serve immediately with spoons and smiles.